Polignano a Mare: а romantic place on the Adriatic coast in Southern Italy

Polignano a Mare – I must admit, was not among our top priorities when we visited Puglia in May. We had put the town in the “just in case we have time” column. Well, I’m glad we had enough time to visit it and got a sense of its spirit. Now in retrospect, I think that we had underestimated the town, but it was so worth visiting it – because of the beautiful sea views, the small quaint beach and the curious historic center with white buildings.

When we were there, the weather was not warm and sunny, there were quite big clouds and a small storm, but we still liked the place.

Where is and how to get to Polignano a Mare

Polignano a Mare is located in southern Italy on the Adriatic coast, about 36 kilometers southeast of Bari. It takes about 35 minutes by car to get between Bari and Polignano. In addition, there is also a train from the city of Barry to Polignano a Mare.

Things to see in Polignano a Mare

The town is situated over several small peninsulas, each of which has a good panoramic place with beautiful views.

The historical center with beautiful old white buildings, narrow streets and an interesting slightly cramped cathedral is located in the central part of the town.

We strolled through the small town, winding through the narrow streets and walking around the peninsulas.

Then we left the old part and headed down the main street.

We came across the small picturesque Monastic Blade Beach, which was visible from the main street.

Continuing along it, we stopped at another landmark – the monument of Domenico Modugno, an Italian singer, composer, actor and public figure, winner of 2 Grammy’s and winner of the 1958 Sanremo Festival.

Behind the monument we went onto a small rocky peninsula and saw some more beautiful sea views.

We went back and looked for a special cave restaurant – Grotta Palazzese, considered to be one of the most interesting restaurants in the world. After several attempts to see it at different places we found a beautiful view – from a terrace in the historical center. The famous restaurant was closed, but we were still pleased to find it.

The time went on and we were in a hurry. Yet, from time to time we stealthily looked back and sideways to remember well all those nice views. And indeed, when I now think of Polignano a Mare, the impressions are still in front of my eyes, so realistic.

Other interesting places nearby

You can combine the walk to Polignano a Mare with a visit to:

Booking.com
This entry was posted in Italy. Bookmark the permalink. 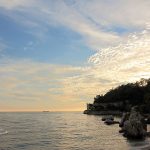 A walk in Trieste - 6 must see spots 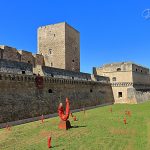 The colors of Bari - a sunny afternoo ...