Five inspirational locations to visit during your business trip in Spain

Travelling for business in Spain can be productive. It can act as the stepping stone for expanding connections and establishing a foothold in one of the continent’s largest economies. This especially applies when travelling to a leading event such as CPhI Worldwide. But, as the old saying goes: “All work and no play, makes Jack a dull boy.” But, with hundreds of inspirational locations to choose from, which should you consider visiting? Here are some sites which are well-worth visiting when travelling for business in Spain:

Seville, the passionate heart of Andalusia

Ah, Seville. The capital of the infamous Andalusia region and Spain’s fourth-largest city. It is also one of the country’s most popular locations to visit, and justifiably so. It is a city with a vibrant culture and diverse attractions. Whether it’s attending a local flamenco performance or visiting the historical sites, Seville will take your breath away! When visiting this lovely city, make sure that you wear comfortable clothing and shoes, as there is a lot to see. Examples include the Royal Palace (Alcazar de Sevilla), the Tower of Gold, and the Barrio de Santa Cruz.

La Sagrada Familia is a historical site and basilica with over 140 years of history. It is best known as one of the most iconic projects of renowned architect Antonio Gaudi, who continued to work on it until 1926. The basilica continues to be built upon to this present day. The most recently finished area is the tower of the Virgin Mary, which was inaugurated on the 8th of December 2021. Each completed section is a work of art that will inspire awe! My personal favourite is the inside of the building during the brightest time of the day. It’s then that the true beauty of the stained-glass windows truly shines (pun intended)!

The La Alhambra in Granada is a must-see location! It is a UNESCO heritage site with a vast history, fascinating and diverse architecture and a triple character. It has served as a fortress, a palace, and a medina. This is one reason the site has a diverse range of buildings. Among them are the Alcazaba, or military zone, and the Nasrid Palaces in the medina or palatine city. When exploring the whole site, be sure to wear comfortable shoes. As the La Alhambra spans 142,000 m2 or 35 acres! Make sure you visit the Palace of the Lions (Palacio de Los Leones)! It features interiors that are genuine works of art!

Del Prado Museum, the place to see over 20,000 artworks

If exploring museums and galleries is your cup of tea, then don’t miss visiting the Museo Nacional del Prado (Del Prado Museum). It is the home and display site of the most extensive collection of Spanish art. This is no exaggeration, as the museum features more than 20,000 artworks. Among them are 8,000 drawings, 4,800 prints, 1,000 sculptures, and approximately 7,500 paintings! There are also thousands of other artworks and historical documents. All this is scattered on four floors, which you can explore at leisure. A good time to visit the museum is in the late afternoon. It is then that the light of the sun will bring out the best of the displays. This is best shown in works such as The Garden of Earthly Delights, Venus and Adonis, Death of the Virgin, or Las Meninas.

The Mosque-Cathedral of Córdoba

If you ever visit the city of Cordoba, be sure to visit and explore the Mosque-Cathedral. The site is known as such as it is a former mosque that was converted into a cathedral. Because of this, you will find a fascinating blend of Moorish Muslim and European architecture. This is best exemplified in areas like the Door of the Palms, the Hypostyle Prayer Hall and the Minaret and Bell Tower. I strongly recommend the Hypostyle Prayer Hall. Because the 850 columns made of marble, jasper, onyx, granite, and porphyry best show the fusion of the different styles. This is because the columns in the original mosque were reused from earlier Visigothic and Roman buildings. Meanwhile, the new ones feature Moorish-made capitals created from earlier Roman models!

This entry was posted in Spain. Bookmark the permalink. 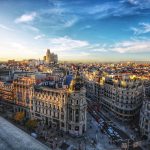