A walk in Constanta: top 5 interesting places to visit

As a child, I visited the capital Bucharest and I crossed the Romania several times, but that was a long time ago. This autumn I had the great opportunity to visit the eastern parts of the country during a trip along the Danube River and Constanta was one of the places I saw. There are several interesting sights in the city that I will tell you about in this article.

Constanta is one of the largest Romanian cities – its population is about 300 000 people. It is an economic center and a great European port. Its strategic location as the third largest port in Europe, Constanta owes to the canal, connecting the Danube River with the Black Sea through North Dobrudja, bypassing the vast delta of the Danube. With its length of about 70 km, the canal is the third largest in the world after Suez and Panama and shortens the way of ships to the Bosporus by about 400 kilometers.

Historically, Constanta is considered the oldest inhabited city in Romania. It was founded in the early 6th century BC as a Greek colony and was named Tommy. Later it fell under the rule of the Thracian Odrysian kingdom. At the beginning of the 1st century it became part of the Roman Empire. Its current name was given to the city in the 4th century by Emperor Constantine the Great in honor of his sister Constantia.

At the end of the 6th century, the city was besieged by the Avars. Later, Constanta was part of the First and of the Second Bulgarian Kingdoms. In the second half of the 14th century the region around was under the rule of the Bulgarian despot Dobrotitsa. In the beginning of the 15th century it fell under the Ottoman rule.

Centuries later, in the 19th century, Constanta was part of the Bulgarian exarchate since its establishment in 1870. After the Liberation of Bulgaria in 1878, Constanta, along with the whole Northern Dobrudja became part of Romania. So far the population in the region was predominantly Bulgarian. Then, the Romanian state took measures to settle the area with Romanians. A large part of the Bulgarian population was exiled in Bulgaria. Interestingly enough, nowadays villages in North Dobrudja have two names – Bulgarian and Romanian.

How to get to Constanta

We got to Constanta, starting from the city of Ruse and then before Bucharest we took the Bucharest-Constanta highway. From Ruse to Constanta we traveled about 4 hours. We saw two of the Danube’s sleeves with interesting metallic railway bridges above them. Then from Constanta we returned to Bulgaria through Durankulak.

Top things to see in Constanta

The most interesting sights in Constanta are located in the central part of the city. I will describe them briefly, starting from the old casino on the Black Sea coast. Then the walk continues up along the streets, and finally reaches the central square. The route is short and easy.

The Old casino and the promenade

No doubt, the Old casino, the emblem of the city, is the most interesting. It is located on the promenade. It was built in the early 20th century. Unfortunately, the building is closed and seems unsupported.

We were able to see it both during the day and in the evening when the promenade was beautifully lit. Definitely, the evening pictures were much more impressive and somehow created a sense of mystery and even ghost around the casino building.

The Church of Saint Peter and Paul

The church is just above the casino and is quite large. In front of it there are antique remains that complement the picture.

The Bulgarian Church of St. Nicholas

The St. Nicholas Church is a little above the church St. St. Peter and Paul in the direction of the main square. Unfortunately, both times we passed it was closed.

The central Ovid square with the statue of the Roman poet Ovid is about 10 minutes’ walk from the Old casino in Constanta. Ovid was exiled in Constanta about 2000 years ago. At that time he was depressed and desperate, so his poetry was sad.

The focus of the square is the imposing and interesting building of the Historical Museum. The building has an amazing architecture. You can see interesting Roman mosaics in a smaller building nearby.

Mamaia is the largest resort on the Romanian Black Sea coast. It is located to the north of Constanta. It is built on a narrow strip of land 8 km long and about 300 meters wide, located between the Lake Siutghiol and the sea. There are many hotels in Mamaia, most of which have interesting exotic names.

We were in the Amur Hotel – luxurious and pompous. For dinner they had prepared a rich buffet with delicious seafood. The breakfast was also very great. Certainly, a very good hotel.

If you go to eastern Romania, stop for at least a short walk in Constanta – one of the biggest Black Sea ports with interesting sights from old and newer times.

Booking.com
This entry was posted in Romania. Bookmark the permalink. 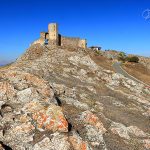 The medieval Enisala fortress in the ...